The label may be very modern: I am not sure that the building was widely known as Fethard Castle before the sign was erected! That Fethard Castle was a building of high status is evident from its archi- tecture. In common with other non-ecclesiastical stone buildings of the same late medieval date in the town, its lower storey faced the street and accommodated commercial activity and its upper storey, which was residential, had a separate entrance which faced the churchyard in the middle of the town.

To access the upper level from the street one had to enter the lower storey, walk through it, exit the building, and then ascend a stair; one could not go directly from lower shop to upper chamber inside the building. To access that upper level from the church one simply walked to the foot of the stair. That stair itself was exposed to the elements in its lower part, and then disappeared inside a turret, deliberately articulating an ascension from public view to private audience. At the top of the stair was a cross-shaped window—did the shape have iconographic value, given that the access was from the churchyard?

The act of washing here is fascinating. Household members and visitors who washed their hands in this Fethard building may have been adhering, even unconsciously, to a simple Figure 6. The practice may have had a hygiene value, as one was entering a space wherein greetings were presumably exchanged through bodily contact and where food was consumed. Fethard Castle has, then, a dual orientation, with its lower part facing the commercial world and its separate and more private upper part facing the church. Its physical duality was choreographed architecturally to a social dualism, as two worlds looked in opposite directions.

Returning to the sign erected in the early s, we can make several observa- tions, each encouraging a meditation on how the sign pulls the medieval building and its social and gender geography inside-out. This suggests, in a sense, that the building retains its medieval dual orientation, but possibly in reverse. So, charters and other instruments of self-government suggested to most contemporary townspeople, and indeed suggest to us as modern commentators, that towns were places of social equality.

Equality is an unsafe concept for the middle ages, even for those urban com- munities with their protected rights. But some comprehension of the principle of equality resided in the shared tenurial conditions of town-dwellers, or at least in the formulation of those principles in the charters themselves. Expressed very simply, we have identities within these written contexts, and we have identities thrust upon us by these written things. Moreover, because textual material constitutes historical source material, we have the promise of having historical identites after our deaths.

Arguably, it is only in narrative contexts that we reveal the complexities of our identities, but even then it is debateable whether our narrative devices are capable of fully articulating such complexities: I doubt, for example, if I could narrate the road-map of my own sense of identity. Rather, it is to evaluate how, through time or at any one moment in time, those other identities mediate or are mediated through, and transform or are transformed by, textualisation. We know this from the written records, because one family in particular—the Everards— appear repeatedly whenever the town is mentioned in the late middle ages.

We would know it anyway from the architecture of individual buildings like Fethard Castle, and from the location of such dual-orientation buildings as it around the church. If this social topography is initially a feature of the s, it becomes even more pronounced in the s and s. In a scion of the Everard family, Sir John, secured from the crown a new charter—the third—for Fethard.

The Archaeology of Plural and Changing Identities : Beyond Identification pdf - GIEE

It provided for the renewal and enlargement of the Corporation, and the endowment of whatever liberties and privileges as were needed to draw more people to the town and increase its trade and commerce. This building was erected between the market place and the churchyard, thus restricting access to the latter and indeed to the church itself to a narrow passageway which either the Corporation or the church body could conceivably have closed off. 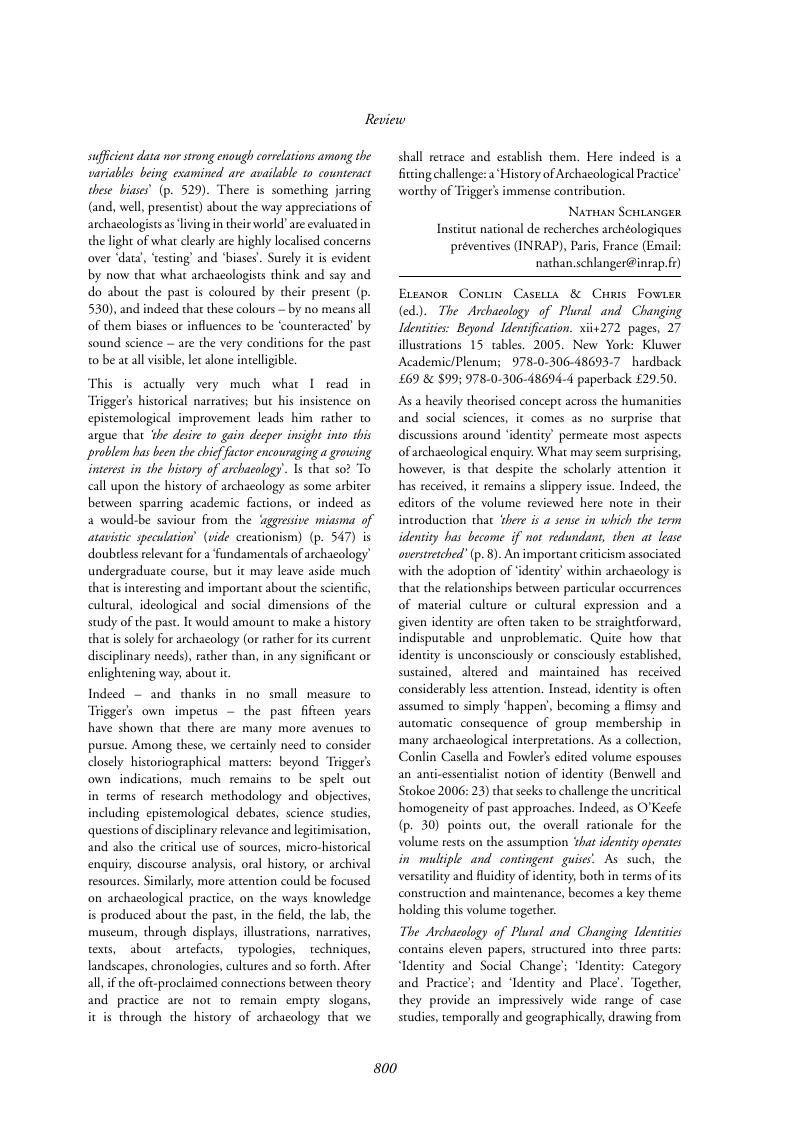 We know from cartographic sources that the house for men was a two-storey building on the south side of the churchyard and built against the outside the town wall, while that for women was on the north side of the church and, as seems certain from eighteenth century sources, occupied the lower part of the tholsel building. Apropos of the latter, it is perhaps surprising that women should be housed in so prominent a building in the town, not least because women are fairly anonymous in the historical record of this period in Fethard.

The establishing of an almshouse at a point of entry to a churchyard is not unique—the contemporary almshouse in Youghal, county Cork, for example, is similarly located—and it underlines the connectedness of Christian worship in the consecrated space of the church with Christian charity in the secular space outside. Sir John was clearly behind this venture. The other almshouse, which was for men, was technically-speaking an extra-mural building Figure 5: g.

It was two-storeyed. We do not know whether the entire building or one of its two storeys constituted the almshouse, nor do we know if the two storeys were internally connected. Whatever the case, it is fair to describe this as yet another dual-orientation building. Rather, Sir John may have delib- erately placed the almshouse for men facing the eastern parts of the parish church, thereby reinforcing through a spatial association the connectedness of charity and salvation. Incidentally, in the eighteenth century there seems to have been little new building work.

Those categories are articulated by qualifying adjectives which range from ethnic and gendered, to religious and political, to self and social, and are manifest materially and spatially. There were ethnic identities at play in the town: it was founded and occupied by Anglo-Normans, but there were also medieval townspeople whom one would describe as Gaelic-Irish. There were divisions of class identity materialised in the upstairs and downstairs architectures of the building on which the sign was erected, and those divisions spilled over into the churchyard and the street respec- tively.


The church itself was a locus of identity. The church was also about religious and ethnic identity, in life and in death: for example, its accommodation of a Roman or Catholic popu- lation until the sixteenth century and a Protestant population thereafter meant that its use or non-use as a congregational or burial space at any one moment made it a communicator of ideas of identity. Now, this account of material correlatives is inadequate. In drawing attention to prestige or high-visibility structures and locating particular identity manifesta- tions in each, it undersells the real complexity of the system of correlatives.

There is a greater range of spaces and objects in which identity materialises than I can account for here. In mitigation, there are gaps in our information: the absence of information about lower-grade houses within the town, for example, means that we can say little about how notions of identity were articulated in these particular spaces. Also in mitigation, there are practical problems of narrativising here.

These problems notwithstanding, there are some important points arising from the material correlatives indicated above. The third is that these conceptualisations existed in relationships of contingency with each other, so that in eighteenth century Fethard, for example, there were connections between masculinity in gender identity , social power in class identity , and Protestantism in religious identity. Finally, these conceptualisations of identity revealed themselves in the practical actions of social agents.

The Archaeology of Plural and Changing Identities

This paper started with the story of the sign on the castle, a material object in and of itself, and an object that occuped a space from which it took meaning and to which it added meaning. The problem with the check-list approach is, I think, that it leads us to see multiple identities as reducible to a set of simple category-headings, and then to reduce the relationships of those category headings to binary oppositions: male versus female, Catholic versus Protestant, upper class versus lower class.

One can certainly understand how binarisms operate in the negotiation of the world, but this is not because the world is necessarily constructed of binary rela- tionships but because we conceptualise our world to be negotiable by binarisms. Following Classical precedent, this dualism resolved itself into a distinction be- tween anima and corpus, soul and body Bynum, —1; see also Benson, Some Final Thoughts Identity, as an overarching category, cannot be conceptualised as existing in isolation from other categories such as those of history, metaphor, and ownership, listed earlier which we use in archaeology to describe the conditions of being hu- man or the consequences of human action: identity exists within, and is a product of, historic time, it can be understood through metaphor and it has itself metaphoric value, and it can be owned or can be used to claim ownership.

maywetveporru.ga In this paper I suggest that such binarisms fail to recognise the emergence of new social formations and their material culture correlates that are much greater than the sum of their constituent elements. Using early nineteenth century Kangaroo Island, in Southern Australia, as my case study, I argue that it is virtually impos- sible to tease apart Kangaroo Island society into its constituent racial, gender and class elements.

The archaeology of plural and changing identities : beyond identification

Furthermore I suggest that such attempts to breakdown the society into its preformation constituents of Aboriginal and European ignores the reality that within a very short time of arriving on the island this relatively new social entity would have undergone substantial change. This is the subtext of many of the archaeological interpretations. Indeed very little exploration is given to alternate views as most archaeologists have as- sumed unproblematically that the women were responsible for manufacture and probable use of the stone and glass scrapers which are found at these sites.

Introduction Historical studies, including historical archaeology, tend to be dominated with binaristic terminology including the apparently simple male and female; men and women; native and newcomer; settler and Indigene; invader and traditional owner; victim and victor; slave and slaver, and so on. Such dichotomies seamlessly lend themselves to the development of interpretive paradigms such as invasion and resistance; resistance and accommodation.

Dichotomies are reassuring—they cat- egorise the world into a black and white comprehendible pseudo-reality, by simpli- fying and homogenising complexity, variability and uncertainty. Un- decidability refers to the im possibility of deciding between discrepant and often contradictory orders of meaning and yet it should not be confused with indeci- sion.

This chapter emerges from a research project that considers cross-cultural cross-gender relations in nineteenth century Australia. It has as its focus an analysis of the theoretical construction of key paradigms that dominate nineteenth century Australian Aboriginal historiography. These are the mutually dependent notions of resistance and accommodation and the recently emergent discourse of creoliza- tion. Although ostensibly governing all of the country this tiny settlement was, in reality, unable to exert control be- yond the boundaries of the Sydney region.